Blessed Edmund Ignatius Rice was born on the 1st June 1762. He was born in Callan, Ireland at a time of great troubles. England totally dominated the land and people of Ireland. The laws of the time made it particularly difficult, even dangerous for people to practice their Catholic faith. No Catholic was allowed to own land or even receive an education.

However, against all the odds, Edmund succeeded in making a good living and ran a profitable business. As a teenager Edmund worked for his uncle in fitting out ships with food for their long journeys. 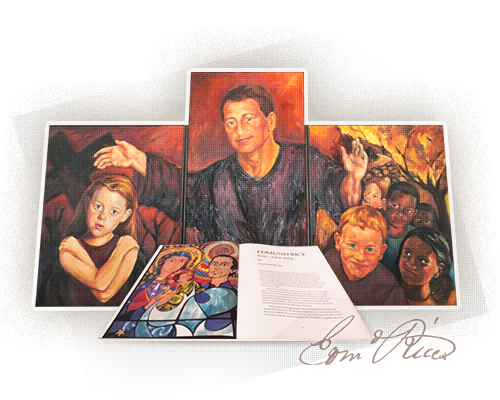 He inherited the business from his uncle when he died. Edmund had a strong Catholic spirituality. He attended daily mass, prayed the rosary often and helped the poor as best he could.

In 1785 Edmund married Mary Elliot but sadly she died four years later giving birth to a daughter Mary who was disabled.

It was the way Edmund loved his daughter that increased his love of the poor. One example was the Mendicity Institute where he helped to provide food, shelter and work for people forced off the land because of famine and poor prices. Edmund soon was seen as a man of practical kindness and deep spirituality.

At this time Edmund was more and more attracted to the religious life and that of the brothers and priests. He began reading Scripture more, especially sections about the poor and needy. It wasn’t long before a small group of likeminded men were meeting regularly with Edmund.

The example of the founder of the Presentation Sisters, Nano Nagle led Edmund to consider the religious life. His first step toward making his vision a reality was to start a night school for boys.

It was extremely difficult to keep people interested in helping but finally two men from his hometown came to help him, Thomas Grosvenor and Patrick Finn. These men also shared his vision of starting a religious order. On the 7th June 1803 Edmund opened his school, which was named Mt Sion. The school was small and had to conduct many outdoor classes for some two to three hundred boys.

At this time Edmund also drew up the rules for the New Order he wished to start. On the 15th August 1808 Edmund and seven brothers took their first religious vows.

News spread about the amazing effect Edmund and his brothers were having on previously uncontrollable boys. By 1809 there were seven hundred children attending Mt Sion. The most important lesson of each day, Edmund said, was the time spent (about 30 minutes) in religious instruction. Edmund had to devise an educational system that thoroughly educated the boys but emphasised spiritual and gospel values. He was succeeding beyond expectations.

Seemingly at the height of his growing successes Edmund faced a very difficult period. From 1816 – 1820 a new bishop seemed to wish to destroy Edmund and his enterprise.

Fortunately truth prevailed but a split occurred when Edmund was finally given permission to establish his order as a Pontifical order which meant the bishop had far less authority over the brothers leaving them free to move to where they were needed.

The original Presentation Brothers continued while Edmund formed the new “Christian Brothers”, the year was 1822. At this time in history it must be noted that just thirty brothers were educating, free of charge, some 5,500 boys in twelve different towns or cities.

Catholic and Protestant alike spoke highly of Brother Rice, many looking on him as a saint. His saintliness was further enhanced by his prediction that despite the brothers caring for victims of a Cholera epidemic not one of them contracted the disease.

Inspired by the motto adopted by Edmund “The Lord giveth and the Lord taketh away” (Job 1:21) the brothers survived the ordeal of 1829. When the Brothers tried relying on the government for assistance they found this restricted their religious freedom and so they relied on providence and the support of the people for aid and their faith was rewarded with overwhelming support.

Br Rice retired at the age of 76 though as expected he remained active in visiting his schools, counseling students, and inspiring his Brothers. He had taught the younger brothers to rely on God, pray deeply, and “give to the Poor in handfuls.”

There are now many thousands of people working in some thirty countries around the world inspired by Edmund and living out his dedication to the poor.

Adapted from an article by Denis Hanratty